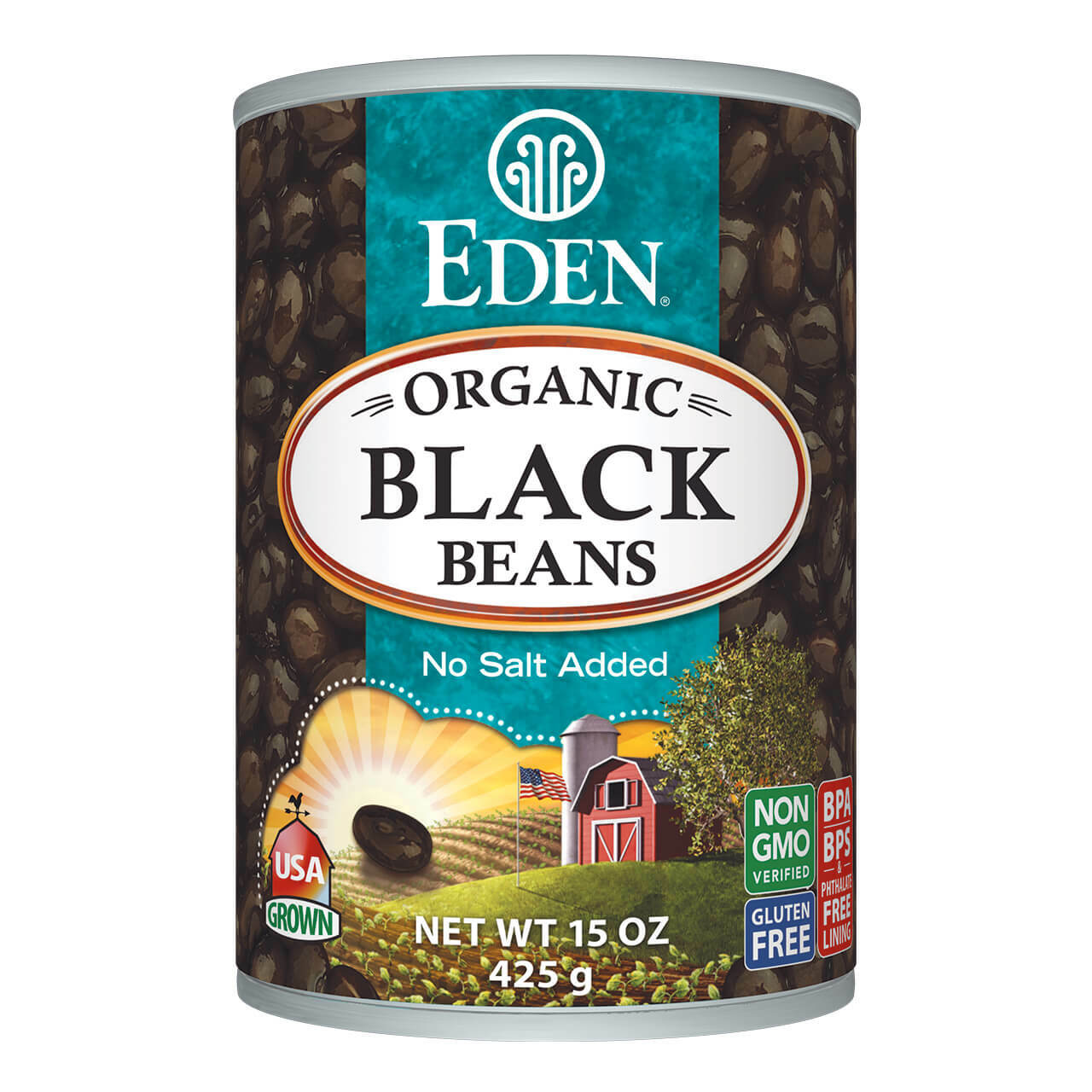 Eden Foods Inc. is one of the companies that I know of that makes salt-free, organic, canned beans, without adding BPS (Biphenol-S), Phthalate, or BPA (Biphenol-A) in the lining of its cans. I have known BPA as one of the hormone-disrupting chemicals that has been linked to obesity, asthma, diabetes, reproductive diseases, and some cancers. I found Eden Organic black beans when I visited Key Foods supermarket a few days ago. I bought this product due to the fact that, when I read on its can, it was written no added salt with no preservatives. Although I usually cook my own beans, sometimes, I like to have this product around for convenience and backup if I run out of my own cooked beans.

The draw for me is that this product is organic, nutritional, has all the amino acids that regular protein has, delicious with very low sodium, versatile, and high quality. However, it is a little bit more expensive than some canned beans, but I want organic products and it’s really worth it to me. I am pretty impressed by Eden’s marketing model and business-designed circulatory concept (recycle-reuse-rethink). As Eden made it clear on its websites that its beans are being grown organically by the family farmers and also working with growers in upstate New York and Idaho to ensure that Eden’s needs are reliably met, I would recommend Eden to collaborate with those farmers in making their organic farming practices known.

Eden Organic Black Beans consists of Organic Black Turtle Beans, Water, and Kombu Seaweed without the use of preservatives, and no added salt in its NET WT 15 (OZ) 425 gram with a shelf life of three (3) years. This product is organically grown free of gluten and has no synthetic fertilizers. This product is non-GMO verified by the Organic trade organization (OTA). The Organic Trade Association is the membership-based business association for organic agriculture and products in the USA. It is the leading voice for the organic trade in the USA, representing over 9,500 organic businesses across 50 states. Its members include growers, shippers, processors, certifiers, farmers' associations, distributors, importers, exporters, consultants, and retailers.

Black beans are the only cultivated plant food that fixes nitrogen into the soil due to a distinctive type of bacteria in their root nodules. Black Beans plants produce nitrogen-rich protein in their seeds while depositing nitrogen in the soil. This unique action increases soil fertility while producing a food crop. So, it is a perfect gesture that Eden relies on its business on black beans.

As black beans is environmentally friendly, it is relatively sustainable since there is no significant damage to air, water, land, soil, and forests. Besides, it has a relatively moderate water footprint. The ingredient of this product also contained water, and Eden stated in its sustainability report that approximately 25% of the water comes from a well producing pristine water in its facility, and the remaining 75% of water is obtained from the nearby municipality in Eaton County (Indiana). The water is filtered through a fine-particle up-flow filtration system at the cannery. However, Eden did not clarify the source of both 25% water from its facility, and the other 75% water in Eaton. I would recommend Eden be more transparent in highlighting its water source.

I hovered several times on Eden’s website to see where it sources its kombu seaweed from. Kombu seaweed is edible kelp. Almost 98% of kombu seaweed is produced in Hokkaido, Japan. It is added to black beans to make them more digestible as it contains vitamins and minerals which enhance flavor. I assumed Eden gets its Kombu seaweed from overseas, not from the USA. It would be more clear if Eden mentioned where it sourced the kombu seaweed from because there is no information disclosed, but Eden only mentioned that kombu seaweed contributes on average, 48.4 mcg of iodine per ½ cup serving, or 32% DV (daily value) based on their third-party independent laboratory analysis. It could be clearer, and more helpful to trace Eden's supply chain if it mentioned the name of its third-party independent laboratory.

Eden Foods Inc. does not reveal on its website or YouTube page how the organic black beans are being prepared in its facility. However, I found out about the general black beans preparation process from a company called Great Value. Organic black beans are soaked overnight in a large pot, covered with fresh water for 12-36 hours with the amount of water three times higher than black beans in a large pot. Then put the large pot with the beans on the stove and bring it to a simmer for about 30 minutes for the beans to absorb all the water. Then turn off the stove. In the canning process, the cans are lined up, filled with the soaked black beans and kombu seaweed with no salt or preservatives, then water is added to the shoulder of the steel can. Then, packed in their custom-made BPA, BPS, and PVC-free lined steel cans. The filled cans are put in a steaming pressure machine for 30 minutes.

Leadership in energy and environmental design is a rating system devised by the United States Green Building Council (USGBC) to evaluate the environmental performance of a building and encourage market transformation towards sustainable design. As Eden mentioned its good practice by using leadership in energy, I did not get information stating that Eden is shifting towards renewables as it claimed by its leadership in energy strategy. Eden was commented with a green packaging award based on its responsible packaging guidelines for the organic industry in 2010 in recognition of its BPA Free cans, which was a perfect move. I would like to advise Eden to continue and be committed to reducing, reusing, recycling, rethinking, and re-evaluating its existing practices with transparency, not because Eden is an organic foods producer then it is organically progressive.

Eden is USDA certified America’s senior natural food company and a principled provider of organic, traditional, pure & purifying food. It was founded by Michael Potter in 1968 in Clinton, Michigan. Eden works to procure the best food possible. Eden's main motto is “no untoward additives, irradiation, genetically engineered food experiments, preservatives, food coloring, and refined sugars”. It is also authentic, and the safest most nutritious certified organic food in the US. In fact, not only is Eden one of the oldest natural and organic food companies in the USA, but it is also the largest independent manufacturer of dry grocery organic foods.

If you haven't purchased the Eden foods brand yet, I am very sure you have at least seen it as it is sold in natural food stores and supermarkets via traditional natural and grocery distribution channels. Quite interesting, Eden highlighted its core goals on its website, which stated that Eden provides the highest quality, life-supporting food, and accurate information about its food, its uses, and its benefits. When I reviewed organic black beans, I noticed that what Eden stated in its core goal is not true. There is no information that states the type of organic farming practices the family farmers are implementing on their farms. So, if Eden provided quality information about the sustainable farming practices that its family farmers are executing, I would have rated it higher. Eden also plays a good role in keeping biodiversity in its facilities. Across its facilities, Eden has seven buildings including native hardwoods, wetlands, and fields. Compost generated from four kitchens is used to enrich the organic plant beds. Eden also restores native greenery and wildflowers as a haven for bees, birds, herons, muskrats, minks, foxes, fish, butterflies, turtles, frogs, squirrels, and woodchucks. One of my main concerns is that Eden's founder Michael Potter has committed several sexual harassments in the workplace with female employees to an extent that the American Equal Employment Opportunity Commission (EEOC) sued him in April 2022 for touching multiple female employees inappropriately.

Eden also stated in its sustainability report that its growers are not using toxic pesticides, fertilizers, or weed killers on its farms. I would recommend Eden make transparent what organic agricultural practices its growers use on its farms. Again, Eden cleaning products are 100% biodegradable and contain no phosphates or petrochemical ingredients, which is another good step in moving towards preserving the environment. However, as an analyst, I recommend Eden to partner with an Eco-sound pest management company. Eco-sound Pest Management is a leader in successfully practicing ecologically sound alternatives for modern pest management in Michigan. Eco-sound will help Eden design and implement the first organic structural pest management systems for post-harvest handling. If Eden partnered with an Eco-sound pest management company, it would be an excellent gesture shifting towards environmentally sustainable goals.