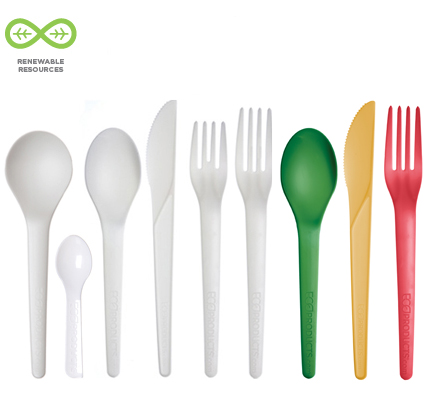 Single-use plastic waste is a problem because plastic takes hundreds to thousands of years to break down, and it also leaches toxic pollutants into the earth and ocean. Therefore, compostable products help divert waste from landfills and improve vital soil nutrients. A case of 250 forks, spoons, and knives is $191. ECO Product’s Plantware Cutlery comes in a rainbow of colors, perfect for any party or restaurant. They are also durable, with a heat tolerance of up to 200℉, and compostable in a commercial compost facility. However, corn used as a raw material is controversial since it is raised in a monoculture that depletes nitrogen and other nutrients from the soil, and requires lots of water to grow. I would recommend consumers try to look for alternatives that are made from bamboo (a sustainable crop), recyclable, or do not have to use a commercial compost facility to decompose at a faster rate.

ECO Products’ Plantware Cutlery is made with Polylactic acid (PLA) or more simply “corn plastic” since it is made from fermented corn starch. Some people believe that corn plastic is “carbon neutral” since it comes from renewable, carbon-absorbing plants, thus reducing the emissions of greenhouse gases. However, what they fail to take into account is that corn generally is not a sustainable crop. Corn is raised as a mono-crop, which upsets the natural balance of soils as the same crop on the same plot of land is grown year after year. Therefore, there are decreased varieties of bacteria and microorganisms that are needed to maintain the fertility of the soil; corn also requires lots of water to grow. Additionally, genetically modified corn is used to create ECO Products, which can cause environmental harm by increasing the use of toxic herbicides and decreasing biodiversity.


BPA, or bisphenol A, is an industrial chemical that has been used to make plastics and resins. Exposure to the chemical is a concern because of the possible health effects on the brain and link to increased blood pressure, type 2 diabetes, and cardiovascular disease.

I know as a consumer that I generally want things to be compostable, but what's the difference between biodegradable and compostable? Because to me, they sound like the same thing, but in fact, they are very different. Biodegradable means that a product can be naturally broken down by microorganisms, such as bacteria or fungi, and absorbed back into the ecosystem. Since this term applies to almost everything, it is a pretty meaningless claim and has been abused through greenwashing. Compostable products are all biodegradable, but they are specifically intended for a composting environment. Compostable items will not break down easily in landfills and they cannot be recycled. However, if they are thrown away into a compost heap, where microorganisms can reach them, they break down. ECO Product’s Plantware cutlery has been tested by the American Society for Testing and Materials (ASTM) for compostability and is compliant with their standards. ASTM is an organization that publishes production and testing standards for various industries. However, Plantware cutlery will only break down within three months if it is in a controlled composting environment that is an industrial composting facility heated to 140 degrees Fahrenheit and fed a steady diet of digestive microbes. As a regular consumer, you can’t compost it and you can't recycle it; ECO Products is really just giving consumers something that has to be thrown into the landfill.

The manufacturing of PLA is a multi-stage process that uses high heat to create a polymer resin. ECO Products use dextrose (sugar) from yellow dent corn to create their PLA products, therefore, only part of the corn kernel is used to make PLA. Other parts are used to make ingredients for salad dressing, snack foods, pet feed, and more, thereby allowing a single kernel of corn to produce both PLA and food products. Additionally, the production of Plantware cutlery releases fewer toxic substances than making petroleum plastic and uses less energy, spewing an estimated two-thirds less of greenhouse gas.


The company made an effort in 2011 to be transparent with its supply chain by conducting a self-assessment of its carbon footprint. The study concluded that the majority of ECO Product’s carbon emissions come from 41% materials, 20% manufacturing, and 17% transport. Since 2011, ECO Products has issued 8 annual sustainability reports with the goal to become even more environmentally and socially responsible. I like that the company is trying to be transparent and mindful of its carbon emissions; however, I think they need to switch to different raw materials for production since a huge portion of ECO Products’ carbon footprint comes from growing and harvesting raw corn materials.

ECO Products’ headquarters is located in Boulder, Colorado and they have been in business since 1990. The company’s mission is to “...work to advance Zero Waste systems, and help [their] customers be better stewards of the environment.” In 2012, Eco-Products was acquired by the Waddington Group, a large corporation part of the Food & Delivery segment that serves restaurants, grocery stores, entertainment venues, and other retail sectors. This is important because Eco-Products now has access to a wider audience and potential customer base. In ECO Product’s annual sustainability report they have a section called “Our People” where they talk about their efforts to empower their workers. For example, each year they have at least 90% of their employees include a sustainability goal in their performance review. However, I could not find any information about the labor laws they follow or the location of their manufactures. In sum, the company has sustainable values built into its mission, and advocate for its worker’s input, but they are a long way from becoming truly sustainable.