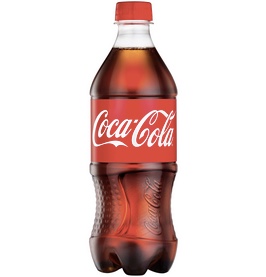 Coca Cola is a major soft drink company that retails in most countries across the globe. They have more than 900 factories worldwide and 13 factories in the US. Overall, I was really disappointed with this brand. They were labeled the world’s biggest plastic polluter in 2019 in a survey by Break Free from Plastic, they discourage their workers from unionizing, they have polluted water supplies in India, and are just an unethical company overall.

Coca Cola’s website does not disclose a lot of information about where their ingredients are sourced. I had to use other sources to find out where they source their ingredients, which I found frustrating. Coca Cola needs to be more transparent about this.
Coca Cola is mainly made from cola leaf, kola nuts, high fructose corn syrup, and carbonated water. The cola leaves are prepared at the Stephan Company plant in Maywood, New Jersey. Here, they extract cocaine from the cola leaves, which they then sell to Mallinckrodt, the only company in the US that is licensed to purify cocaine for medicinal use. This is a suspicious practice given the dangers of recreational cocaine use. I wonder why Coca Cola continues to use this ingredient in their beverages; is it not possible to create the same flavor using other ingredients? The kola nuts are used for caffeine. High fructose corn syrup is used to sweeten the beverage. This syrup originates from corn, which has a large environmental impact; the crop requires a lot of pesticides and is normally grown on land with no crop rotation, making it unsustainable. These ingredients are not grown organically and are not locally sourced. Because Coca Cola is such a huge and successful company, they definitely have the money and resources to source their products in a much more environmental way and to use a different sweetener, I am disappointed they do not do so.
Another key component of Coca Cola is the packaging. Because the beverages are sold in plastic bottles at such a high volume, Coca Cola was rated the world’s biggest plastic polluter in 2019 by Break Free from Plastic. In early 2021, they launched a new bottle made from 100% PET plastic, which is recyclable and will reduce greenhouse gas emissions significantly. In various South American countries, Coca Cola is sold in recyclable bottles that can be brought back to the store and refilled up to 14 times. This is not an available option in the US and though this may sound like a very sustainable practice, it places all of the responsibility of recycling on the consumer as opposed to the company. Furthermore, areas have such varied recycling provisions that consumers may have difficulties knowing what to recycle and what not to and the materials themselves may not be recycled properly after being taken to a recycling plant.
A large section of Coca Cola’s website is dedicated to their packaging; their goal is to make 100% of their packaging recyclable globally by 2025, to use at least 50% recycled material in their packaging by 2030, and to collect and recycle a bottle or can for each one they sell by 2030.
While all of this sounds great, I don’t think Coca Cola is making as many steps towards being environmentally friendly as they claim to be. I discovered that the company has lobbied against deposit return programs that provide incentives to recycle. Their website uses very carefully worded language and lots of terms that are commonly used to green wash; they uses phrases such as “our planet matters,” and “our company focuses on the highest-priority sustainability and environmental, social, and governance issues,” which seem like statements that the company is making in fear of bad press as opposed to meaningful statemets that reflect the company’s values. Their website lists a variety of initiatives that they are involved in but these initiatives are scattered around the globe and don’t seem to be making a significant positive impact in comparison to the harm that Coca Cola has caused with their plastic packaging. It is clear that Coca Cola is emphasizing the importance of sustainability and recycling on their website to cover up the damage they are causing to the environment; the company is likely motivated by profit and not the well being of the planet.
I strongly believe Coca Cola could be doing a lot more to be a sustainable and environmentally friendly brand especially given that the company holds power throughout most of the world and has a lot of money and resources.

It was very difficult to find information on how Coca Cola is made. It is rumored that there is a secret formula for Coca Cola and that only two people have access to it. This is very suspicious. I think that if Coca Cola is being sold on such a great scale it is imperative that they share how it is made. I also do not see why Coca Cola needs to be secretive if they already have so much money and power; they hold a great market share and have strong branding and licensing capabilities. I suspect that the only reason the formula is kept secret is because there is some harmful practice involved that they do not want to receive any backlash for.
There are 13 Coca Cola factories and 75 distribution centers in the US and most of their ingredients are imported from Peru and Bolivia. It is clear that Coca Cola production requires a lot of energy given that there are thirteen factories in the US alone. The production is also very fast which leads me to believe that Coca Cola is using a cheap energy source.
There are more than 900 Coca Cola factories in the world. Each of these factories is likely emitting pollutants into the air and water. The company also has a separate bottling partner in each country; this is suspicious because it makes it much easier for Coca Cola to not disclose information on their packaging process and materials.
The company’s production has a very controversial past; they have built bottling plants in a few states in India that polluted local people’s water supplies. These plants had to be shut down and many of the areas have not recovered from the pollution.

Coca Cola has a very controversial past and are still involved in some unethical and suspicious practices. The International Union of Food severed its partnership with the company, saying that they attacked union leaders and intimidated union members by firing them and using various other disciplinary actions. The company has also been accused of using child labor. They do not disclose a lot of data regarding their company demographics. For example, they do not disclose the percent of minorities in management, their gender pay ratio, their minority pay ratio, or their recordable incident rate. They should definitely disclose this given that 42.7% of their employees are minorities and we as consumers need to know if they are being treated well in order to evaluate the company’s diversity and inclusion practices. During the initial rise of the COVID-19 pandemic, they claimed that “nearly all” of their employees’ work was made remote, leading me to believe that they still had their factory workers working as “essential workers” during the worst of the pandemic. I believe that this is unacceptable given the money and resources available to Coca Cola. The company’s website also did not talk about any other compensation offered to their workers during the pandemic, thus it is obvious that they mistreated their workers and are trying to cover it up. The company has also faced multiple lawsuits for racist incidents and in the past they refused to hire people of color.
A 20 oz bottle of Coca Cola is typically sold at around $2. This makes Coca Cola a very affordable beverage and it also available at almost every gas station, grocery store, and restaurant. However, the sugar content in one serving of the beverage is almost twice the amount recommended by the World Health Organization. The high sugar and caffeine content makes the beverage addictive and causes consumers to have a crash in energy shortly after consumption. If consumers are addicted to this beverage they are likely consuming multiple Coca Colas in a day and because of the excess sugar this can lead to diabetes and other health problems. Coca Cola has not really addressed the negative health effects of their beverages besides the fact that they created Diet Coke. Diet Coke contains harmful artifical sweeteners in the place of sugar, so this isn’t really adressing the issue nor is it benefiting the health of consumers. Coca Cola certainly has the money and resources to create a much healthier beverage so there is no excuse for why they haven’t done so already.
This is unacceptable in my opinion. It is clear that Coca Cola is making a great effort to sell themselves as an ethical and sustainable company simply to cover up their controversial past and current unethical practices. Because the company is so large, they are definitely able to cover up a lot of their unethical practices; it is much more difficult to keep track of what a company is doing if they are located in so many countries and have so many factories.
I urge consumers not to support Coca Cola. It is clear that the company is masking how unethical they are. The company does not deserve any support until they start being more honest about their practices and apologize for their past actions.