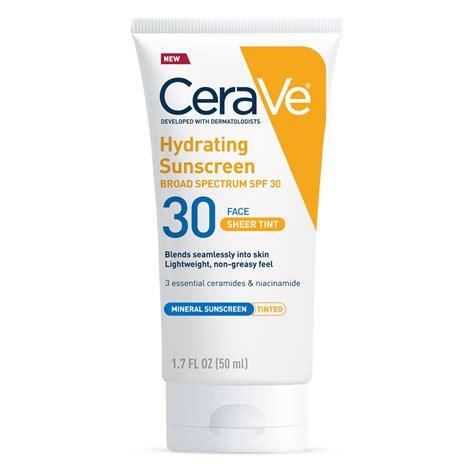 Although Cera Ve has been proven to be great for the skin, they clearly do not prioritize sustainability. With no mention of sustainability on their website and the lack of vegan and cruelty-free ingredients and practices, I cannot say that they are a sustainable brand. This specific sunscreen is vegan, but not reef safe. Cera Ve’s parent company, L’Oreal, has made significant efforts to improve their brand’s sustainability. This is wonderful, but L’Oreal definitely has a very long way to go before being considered a sustainable brand.

Cera Ve’s products are all fairly similar in terms of ingredients. Most of these ingredients are not particularly detrimental to the environment, nor are they particularly sustainable. The first three ingredients in the hydrating sunscreen are water, C12-15 Alkyl Benzoate, and isohexadecane. C12-15 Alkyl Benzoate is a safe emollient that reduces water loss from the skin. Isohexadecane is also an emollient that also serves to improve the texture of the product. However, it is petroleum based, which means it’s sourced from crude oil, which is not sustainable. Although this product is vegan, not all of Cera Ve’s products are as they use ingredients such as glycerin and other animal products. Cera Ve claims to be trying to become a 90% vegan company by 2021, but it is unclear whether or not this goal has been met, which was frustrating to see. It is also unclear whether the sunscreen is reef safe. It likely is not, as it contains titanium dioxide and zinc oxide which are generally used in nano-size particles, which are not reef safe. It appears that although Cera Ve’s ingredients are not outright unsustainable, there is definitely room for improvement.

There was very little available information online about Cera Ve’s manufacturing. What I was able to find was that it is not a cruelty free brand, and it uses plastic packaging that cannot be recycled. However, I was able to find a decent amount of information about L’Oreal’s efforts about sustainable manufacturing. They currently have 72 carbon neutral sites, which includes 19 factories. They seek to have all of their sites be carbon neutral by 2025. They are also attempting to turn all of their factories into water loop factories, which would mean all of its water is retreated and recycled. Although L’Oreal’s manufacturing includes a lot of sustainability efforts, there is not much information about what could be unsustainable.

Cera Ve’s website contains no information about sustainability. This indicates to me that sustainability is not a priority for them. However, they are owned by the company L’Oreal, which has several sustainability initiatives outlined on their website, along with progress reports. I really appreciated this; most companies that list sustainability goals do not provide updates, leaving the consumer to wonder whether they ever did the things they promised to. L’Oreal has pledged 10 million euros to environmental projects around the world, and has many set goals that are centered on sustainability. These goals, if met, will surely affect the Cera Ve brand. However, L’Oreal also claims to be against animal testing on their website, yet continues to do it. They state that they are dedicated to animal testing alternatives, but don’t seem to be taking any active steps to find or utilize any. Overall, I was somewhat impressed with L’Oreal’s sustainability initiatives.