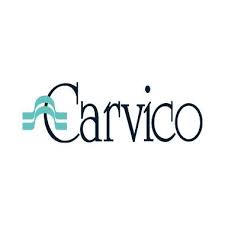 Founded in 1962 Carvito was the first textile company in Italy to specialise in the production and dyeing of woven fabric. Their business model is based on the notion of ‘doing things properly’ and producing a small range of fabric so that they can ensure the quality of each and every product. This ethos certainly lends itself well to a sustainable business model, as a smaller product range means more time and attention can be applied to ensuring that each and every product is made as sustainable as possible.

Since their foundation, in the last 20 years Carvico have turned towards sustainability to promote environmental responsibility and have implemented several innovative policies aimed at creating a truly sustainable supply chain and a circular economy. They apply a strictly structured ethical code to their practices focussing on social and environmental sustainability by optimising their production processes and reducing waste, certifying their environmental results with clear data, showing interest in the research of sustainable results, supporting international products aimed at preserving the planet, contributing to the development of local communities and spreading awareness among their customers and employees. Their website reflects an impressive commitment to transparency and their claims are supported by several certifications including OEKO-TEX, Global Recycled Standards (GRS) and the Higg Index. By acting so transparently as a model for a textile company committed to sustainability in both word and action, hopefully more companies will follow Carvico’s lead and adopt some of these impressive sustainability practices. In the meantime, the quality and sustainability of Carvico’s products makes them a leader in recycled activewear fabrics, as evidenced by the fact that they currently hold the exclusive licence for the swimwear market of ECONYL regenerated nylon. Carvico is a fantastic example of a textile company that can be used to make a supply chain more transparent and sustainable.

Carvico produces a selection of high end recycled fabrics made of ECONYL: regenerated nylon made using the pre and post consumer waste from fishing nets, fabric scraps and industrial plastic. They work alongside ‘Healthy Seas’ to source much of the waste used for this fabric, a company which unites governmental associations and several businesses towards a shared goal of cleaning global waters from pollution.

Healthy Seas have collected over 510 tons of fishing nets since 2013 and collaborate with local fishing communities to prevent the pollution caused by discarded fishing nets and help them find new disposal methods for their waste. They also run training programs to promote the importance of environmentally sustainable choices, reaching over 380 children and directly informing them on sustainable choices. Carvico’s commitment to working with initiatives which are clearly committed to sustainability speaks to their own commitment to having an ethical supply chain.

Once the waste materials have been sourced they are taken to the AquafilSpA regeneration plant and turned into ECONYL, which then becomes the premium ingredient for their high end Nylon fabric. Their quality guarantee means that designers do not have to compromise on quality in order to make more sustainable choices.

25 out of the 107 fabrics Carvico advertises on their website are made of recycled yarn which is an impressive start but still leaves over three quarters of their products being made from virgin materials. However, while there is clearly room for improvement, the policies and practices Carvico have applied in their overall manufacturing process still make these fabrics a more sustainable alternative to their less environmentally friendly competitors.

Carvico’s commitment to sustainable production processes, and limiting their personal impact are a standout feature of their company practices that make them entitled to call themselves a ‘benchmark for successful green entrepreneurship’. Carvico has made a lot of improvements to their production practices in order to reduce their energy consumption and ensure their factories run in the most sustainable way possible while still meeting the quality requirements of their consumers. They only use electricity from renewable sources and have managed to decrease their energy consumption by replacing mercury bulbs with last generation lamps, introducing new inverters, led lamps and high efficiency engines. They have also upgraded all their knitting equipment to be as energy efficient as possible. These changes have cumulatively saved them 2,579,972 kwh since 2018, the equivalent to 3911 peoples annual consumption per capita and a 12.6% reduction in energy consumption per ton of finished product manufactured.

In 2013 they installed a high-tech cogeneration plant, which generates electricity and useful heat simultaneously to put otherwise wasted heat from electricity generation to good use. Through this plant they use methane - currently the ‘greenest’ fossil fuel - to independently produce their own energy, at the rate of 8,500,000 kwh of electricity. By internally producing their own electricity, Carvico has far more control over their waste and putting it to good use, which they are clearly committed to doing as they display through their advertisement of their innovative heat recovery system. They exploit the thermal power produced during their production cycle to heat their offices, dressing rooms, dyeing, knitting and colour kitchen and maintenance rooms. In doing so they have reduced the thermal consumption per ton of product produced by 55% from 2001-2021.

A high tech waste water homogenisation system helps them towards their aims of reducing the amount of polluting agents in their waste water before it is sent to a municipal water treatment plant where it is purified and discharged, clean,  into the river Brembo. This, along with the system they use to harvest and reuse rainwater in their production process means that 83% of the water used in their production process is recycled. This shows a conscious interest in reducing the amount of water waste produced in the process of textile production which can often produce tonnes of unnecessary water waste.

The various strategies implemented by the company means that their emissions come to be 10 times lower than the limits set by law, with 99% of their waste recycled and reused. Their commitment to addressing each source of energy waste in their production process creates a fantastic model for other textile and apparel companies looking to reduce the overall impact of each of their products.

One criticism I would note is the absence of information available about the source and contents of their dye as this is such a significant part of their business model .With no information available it is impossible to determine how sustainably these dyes are being sourced or used, although their efforts to reduce their waste and to purify their water waste before it is returned to the river helps to offset some of the impact these dyes could have and prevent them polluting local water sources.

Carvico’s business vision stems from a ‘deep respect for man and our environment’ which they claim to translate into a commitment to safeguarding the health of their staff, local communities and the global environment. This certainly suggests a keen interest and commitment to the wellbeing of their staff, which external sites state is based in Carvico, Bergamo and made up of 235 employees. However, there is little information on their website regarding the composition of their staff or the policies they implement to ensure a safe and stable working environment. They vouch for the quality of their products by ensuring they are 100% made in Italy but give no information as to who precisely is making it. This means there is relatively little that can be said with certainty about how socially sustainable their employee circumstances are, although there are no red flags to suggest non-compliance with instated Italian labour laws which set out principles on fair pay, equality and discrimination, strikes and trade unions.

As far as their commitment to sustainability is concerned, Carvico’s environmental policy, which is easily accessible from their website and circulated to all staff, promises to spread awareness among their company staff about preventative measures to preserve the environment. Their top management has committed to supplying resources for the development and maintenance of their environmental projects which the whole staff are involved in and committed to the improvement of the process.