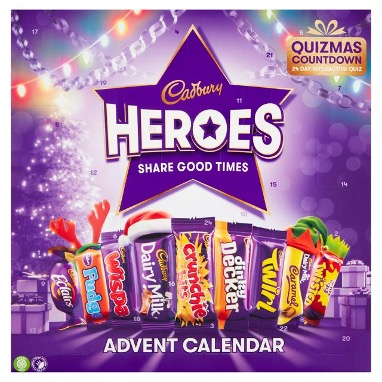 We all know that Christmas is not the most environmentally friendly time of the year due to the sheer amount of things we buy and consume. One of these is the popular, single-use advent calendar, making the countdown to Christmas even more exciting! But these calendars are inherently unsustainable – from the overuse of packaging to how the chocolate is sourced. The Heroes advent calendar displays a Fairtrade Certification and parts of the packaging can be recycled. However, it is certainly far from being a sustainable product! My recommendation if you’re wanting an ethical and eco-friendly alternative would be to opt for a reusable calendar which you can keep and fill with goodies each year. This will massively reduce the wastage of single-use advent calendars and you can choose an ethical treat to pop in them!

When it comes to advent calendars, there’s two things to pay close attention to in terms of what they are made of: the chocolate itself and the packaging.

Let’s start with Cadbury’s chocolate. One of the key ingredients that Cadbury continues to use in their chocolate is palm oil. Mondelez’s 2020 ESG report claims that 99% of their palm oil was sourced from suppliers aligned to their Palm Oil Action Plan. Whilst this appears to be progressive, there continues to be allegations that link Mondelez to forest fires in Indonesia, destroying orangutan habitats and further contributing to global warming. Their response was that they would ‘take action’ against these fires – suggesting that they are aware of their involvement! Furthermore, the huge quantities of ingredients required to produce this chocolate on such a large scale is ultimately unsustainable, contributing greatly to deforestation. The ESG report gives me little hope that Mondelez is tackling deforestation since it is full of language like ‘committed to’ sourcing sustainably and have ‘accelerated efforts’ to reduce deforestation. But very few hard facts on what they’ve actually achieved.

The second component we need to pay attention to is the packaging. It is estimated that there are 16.5 million single-use advent calendars out there each year which will clearly generate huge amounts of waste. For the Heroes advent calendar, the cardboard box and plastic tray are recyclable. The fact that it does not use foil does make it slightly more environmentally friendly as it makes recycling it easier. However, unlike most traditional advent calendars, each chocolate is individually wrapped in single use plastic which is unrecyclable - and totally unnecessary! Also, even Mondelez’s ESG report states that only 2% of their plastic packaging is currently recycled!! Ultimately, the Heroes advent calendar is far from being sustainable, both in terms of the Cadbury chocolate it uses and the amount of excessive packaging.

The Calendar proudly displays a Cocoa Life Fairtrade Certification on the front of the box, meaning that the cocoa they use is 100% sustainably sourced. Since 2012, Cadbury has been dedicated to helping communities in cocoa regions in a range of ways including the farming techniques employed, protecting the environment, supporting the local economy and the community as a whole. Their production techniques help to teach cocoa farmers how to grow crops whilst looking after the environment as well as planting and protecting the trees in cocoa regions.

However, this Cocoa Life label has replaced the well-known Fairtrade stamp which makes me question their intentions behind this. Fairtrade is a recognised international auditing programme that have transparent and robust standards across the supply chain developed by a range of advisory committees. Although Mondelez (the CEO of Cadbury and the owner of Cocoa Life funnily enough) argues that Cocoa Life goes beyond the supply chain by improving the surrounding communities, the company is much less transparent and could just be another way to bypass certain regulations.

The production process is also very energy-intensive and polluting. The cocoa beans have to be transported to a manufacturing facility in which they are then roasted, transformed into nibs and then ground until they are become a liquid. Other ingredients are then added and moulded into the desired shape. This process has many associated environmental impacts including the non-renewable energy sources, the emission of greenhouse gases and the generation of waste. Mondelez has set a target to reduce greenhouse gas emissions by 10% by 2025 and increase their use of renewable energy sources. However, currently only 23% of their total energy used comes from renewable sources, so there’s still a lot of progress to be made.

The treatment of workers across the supply chain is an area Cadbury appears to do fairly well in with a strong diversity, equity and inclusion policy that ensures representation and pay equity. They also establish world-class safety within the workplace through a comprehensive Health, Safety and Environment Management scheme, performing well below the global benchmark for the Total Incident Rate. The Cocoa Life initiative ensures that Cadbury’s farmers earn a better living so that they can have a better quality of life for both themselves and their communities. This has been achieved through education in financial literacy and business skills so that they can increase their income from cocoa farming. The surrounding community also benefits through the support of childhood development and education programmes in an effort to reduce child labour within West African communities. However, is this just another greenwashing example? The ESG report says that they are working towards having a Child Labour Monitoring and Remediation System in place, suggesting that as of yet they have made little progress in preventing child labour. So can they really claim that their Cocoa Life certification ‘supports the community as a whole’?

Ultimately, the Heroes advent calendar performs poorly in all areas. If you really want to commit to being more sustainable this Christmas, I would recommend a reusable alternative filled with sustainably sourced treats!