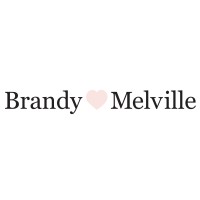 In this review, I will talk about how sustainable Brandy Melville is and how should it do in the future. But I have to say that the brand provides insufficient relevant information about it and and how it reduces its impact on people and the planet. While sustainable brands with hundreds of products under $35 may not be realistic-and nor should it be, if we talk about the true cost of fashion, there are a few other options that act better and they are out there.

As a fast fashion brand, most of the clothes from Brandy Melville clothing is made of polyester and/or cotton. The effects of polyester and cotton on the environment are disastrous. Although cotton is biodegradable, it is one of the most environmentally demanding crops. At the same time, cotton uses around 6% of the world’s pesticides and 16% of all insecticides, which is more than any other crops. Conventionally-grown cotton is bad for the environment because of its high water consumption and pollution, soil degradation, greenhouse gas emissions and use of pesticides and fertilizers. Polyester is artificial, and it can cause significant environmental damage. Polyester is made through a chemical reaction involving coal, petroleum(from crude oil), air and water which require high energy. It can also not be dyed with low impact or natural dyes, so they have to use hash, toxic, dyes on polyesters. The use of polyester and cotton accelerate global warming and droughts because of the fossil fuels and water required to produce them. The constant demand also leads to textile waste and increasing stress on biodiversity.

It is hard for us to find any public information about the exact process of how the clothes are made. A large number of Brandy Melville’s clothes are primarily made in Italy, which is good because Italy has relatively safe labor laws（i.e statutory normal weekly working time is 40 hours and employees must not work more than a total of 48 hours per week), and a good amount of them are then outsourced to East Asia which has cheaper labor and nonexistent workers’ rights. In addition, accidents, fires, injuries and disease are very frequent occurrences on textile production sites, as workers are working with no ventilation, breathing in toxic substances, inhaling fibre dust or blasted in unsafe buildings. It is right to say that the company owners are exploiting the misery and taking advantages of poor populations who has no choice but has to work for any salary, in any working conditions.

Let’s first address the brand’s voice on Brandy Melville’s poor diversity in race. Models in Brandy Melville act as an important part of the brand. However, its a pity to say that the brand almost did nothing to the race diversity of model groups. It is hard for you to see black or Asian faces in their social media platforms—although they do announced to do it. When the brand only has Caucasian models, they are pulling out the false message that only one race is beautiful. The stores even want young girls to resemble the models to work retail to keep up the “Brandy image”. CEO of Brandy Melville claims that black and overweight (we will talk about that later) people would ruin the brand image and reputation. A former worker said recently that if a girl was applying to work there, she should be required to inform them of her race. Shortly after, many former workers began sharing shock stories from their experiences with similar situations.

In addition, it regularly comes under scrutiny for its restrictive and exclusive sizing: an overwhelmingly “one-size'' that is only suited for XS-S young girls. Surveys have shown that 53% percent of thirteen year old American girls are ”unhappy with their bodies“, and this number rises to 78% for seventeen year olds. Knowing this, Brandy Melville has been under attack for perpetuating negative body images among teens.

What’s more, BM began getting overdue backlash because of the Black Lives Matter movement, more specifically on their instagram account. It’s hard to say that they didn't realise the problem of race diversity, they just chose to ignore it. And after facing backlash, the brand launched an“oversize” range that is mainly baggy sweaters and jackets still featured on young, thin, usually white, teenage girls---which miss the point entirely. Besides it, we can see that the brand also has problems as any other fast fashion brands have. There is still a long way for the brand and the whole fast fashion industry to go---if they really want to.