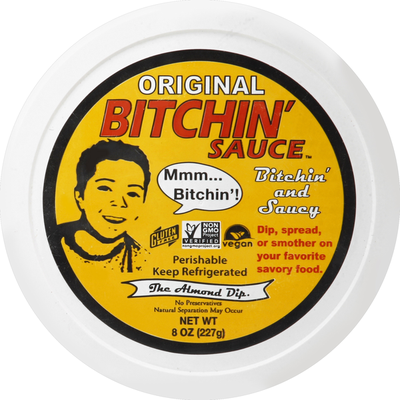 Bitchin’ Sauce is relatively new to the world of condiments and is exploding in popularity, now being stocked on the shelves of huge retailers like Costco. It is an almond-based completely vegan dip. Bitchin’ Sauce is the concoction of Carlsbad, California resident Starr Edwards who originally created it as her own family favorite recipe. Bitchin’ appears to be a straightforward business that produces a quality product, but for a company with nothing serious to hide, they lack transparency. Bitchin’ has done community outreach, and they could appeal to their consumers and establish themselves as an exemplary business by taking some initiative in caring for the Earth.

There are many varieties of Bitchin’ Sauce including spicy flavors and even sweet options. The original flavor is described as “creamy lemon garlic” and it is made with almonds, grapeseed oil, lemon juice, nutritional yeast, Bragg liquid aminos, garlic, spices, and sea salt. Bragg liquid aminos is basically gluten-free soy sauce which serves to add soy protein to the mix. Normal Bitchin’ Sauce varieties are not certified organic but they have a line of flavors which are. Bitchin’ doesn’t explicitly explain which ingredients in their regular sauce keep it from being certified organic, which is partly concerning because they claim everything is non-GMO, so that implies there is some issue with one of the farms they source from keeping the sauce from getting an organic label. For starters, the organic containers say “made with organic almonds,” so I can assume the original Bitchin’ sauce is not. California produces about 81% of all almonds worldwide, so Bitchin’ sources locally but at a cost. The almond industry has received a lot of criticism for being water intensive and for harming bee populations which have to pollinate the trees. Concerning the former point, the water almonds need is nothing compared to dairy and beef. The most water intensive crop in California is alfalfa which is used for animal feed. Almonds are not the cause of California’s water crisis and farmers use 33% less water to grow them than they did 20 years ago. In response to the bee allegations, the pesticides used in the almond industry end up killing many, even though we need them. Of course you can be a conscience almond eater if you buy organic, which achieves that label by coming from groves that responsibly use (or refrain from use) pesticides, saving the bees which are essential. It seems out of character to me that a vegan and non-GMO brand would make their main line of products not organic, and they can definitely do better.

Bitchin’ Sauce is headquartered in Carlsbad, California where according to an article in 2018, there are only about 30 employees. The website offers no information regarding the manufacturing process of Bitchin’ Sauce except that it is “made in Carlsbad, CA”. For a product that is sold across the country and has expanded into Mexico I doubt that 30 employees are cranking out every tub of Bitchin’ Sauce. However, it seems that there really is just one facility in California that produces the sauce, although the employees have probably grown to include cheap labor. I can’t say there is anything wrong with their manufacturing processes, but they would benefit from some transparency, maybe including some information on their about page. The CEO Edwards said in an interview that she believes in doing the right thing when nobody is watching, in effect doing the opposite of greenwashing, but it wouldn’t hurt to reveal their practices if there is nothing to hide.

Bitchin’ Sauce began as a family business (and still is) selling sauce at farmer’s markets across San Diego. Then the Bitchin’ crew began to rent hours at a commercial kitchen, eventually making their way into their own facility. For a “family owned and operated” business I’ve discovered a lot of internal drama. Starr Edwards founded the company with her brother Ryan Smith who ended up starting his own company called Good Lovin’ foods after a legal battle where Edwards ended up with full control of Bitchin’. In older articles there are references to Edwards and her siblings but now on the Bitchin’ website there is no mention of Edwards’ brothers in their story, and she seldom speaks about the incident in interviews. We don’t know the circumstances surrounding this story but it doesn’t reflect well on the image of the company, so it makes sense that they would try to bury it. Once again I think a little transparency or any reference to this split in their website (maybe a link to Good Lovin’ foods) would make Bitchin’ a more upstanding company. Bitchin’ has a history of charitable work giving gifts to foster children and offering a free childcare service for its employees. They have no pledge to sustainability or the planet, but they also seem to be a mostly responsible company. It’s hard to tell if their reverse greenwashing ideology is done for the right reasons at times.