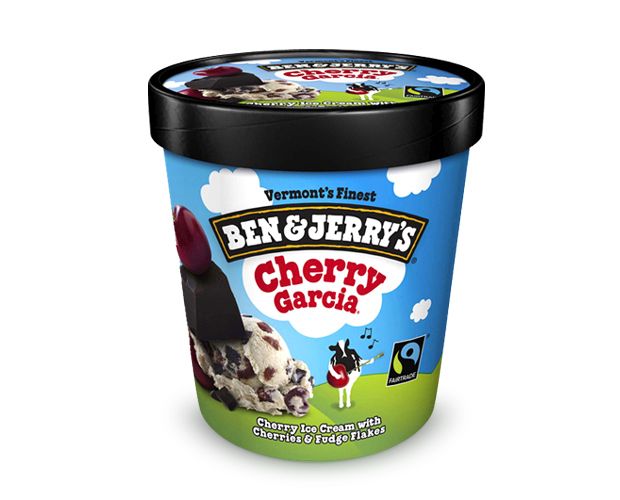 When grocery shopping, the one thing that I almost never forget to buy is ice cream. Among the large selection proposed, my first choice is always Ben&Jerry’s Cherry Garcia ice cream. The richness of the flavour and its intense taste have seduced my palate over the years. However, is this Ben&Jerry ice cream as good on a sustainability level as its taste? Well, according to my research, it is. Although, there are still some progresses that could and should be made.

The ingredients used in the Cherry Garcia flavour of Ben&Jerry are: Cream, Skim Milk, Liquid Sugar, Water, Cherries,Sugar, Egg Yolks, Coconut Oil, Cocoa (processed with alkali), Fruit and vegetable concentrates (colour), Cocoa powder,Guar Gum, Natural Flavours, Lemon Juice concentrate, Carrageenan, Milk Fat, Soy Lecithin.
According to the sustainability section of Ben&Jerry’s website, their products and ingredients are 100% safe, which sounds amazing. However, some studies (though limited) have proven that Carrageenan (a thickener and binder) may promote or cause inflammation, irritable bowel syndrome, glucose intolerance, colon cancer, and food allergies. These studies, to date, have only been done on animals and cells, but there are cases of people reporting feeling better after dropping carrageenan from their diet. Since it’s not yet proven that it’s harmful or not on humans, I think they could have remove it from their ingredients, especially when they already use guar gum, which also act as a thickener and a binder. The website clearly states where other ingredients come from, like the cocoa or the sugar used (respectively the Ivory Cost and El Salvador). It also explains how Ben&Jerry’s, knowing the workers dire working situations, is operating to support the farms’ workers and improve their work conditions.

In 2017, the company was involved in a lawsuit with The Organic Consumers Association that claimed that they had found evidence of glyphosate in a sample of the ice cream. The same year, the company addressed the issue and committed to ending their purchases of all ingredients that had been chemically dried with glyphosate by 2020. In a recent update on their website, they stated that they unfortunately did not achieve their goal. They however thoroughly explained why they couldn’t and how they plan on proceeding on the next years to achieve it with a promise to update their progress every 6 months (they showed how they are getting closer to the goal in their last update in February 2021). Which is great! They took into consideration an issue they were addressed and took action on it with a well defined plan. That’s how a company that claims to be sustainable should evolve. Way to go Ben&Jerry’s !!

The process of making Ben&Jerry’s ice cream is really detailed on their website. Every step is given, from raw materials to the finished product. The transformation to ice cream, the transportation, and manufacturing all require heavy machinery, which produces a lot of solid waste and has a carbon footprint. The company has committed to reducing the amount of solid waste produced in their manufacturing plants. They send the waste produced into a methane digester and generate biomass energy to power the farms. That’s super cool!

For the storage, they solely use hydrocarbon freezers containing a refrigerant (hydrocarbon or HC) that produces fewer emissions than the market standard hydrofluorocarbon (HFC), which is commonly used in the US and has a huge environmental impact. Ben&Jerry’s actually petitioned for the commercial use of HC in 2011 to the EPA ( Environmental Protection Agency) and got it approved. The company makes sure that the products (milk, eggs) from those farms are Non-GMO. It is also certified fair trade which means that workforce issues for farmers are addressed and the producers access better wages and safer working conditions, according to Fair Trade USA. Ben&Jerry’s also has a program called “Caring Dairy” that helps farmers commit to more sustainable practices on their farms. However, a lawsuit in 2017 accused some of the farms collaborators of the company of not meeting the standards. The lawsuit also points out that the cooperative members have faced fines or warnings from state or federal officials for improper environmental practices that have aggravated the state’s water pollution problem. It then mentioned one dairy farm that expanded its operation located near one of Vermont’s most polluted watershed, without obtaining the required state permit. Not really what you expect when you see the company bragging from being certified “Caring Dairy.”

In regard to the ice creams’ containers, Ben&Jerry’s committed to use materials from responsible sources (Forest Stewardship Council certified). It means that the paperboard pints are made from pulp that doesn’t threaten deforestation or loss of biodiversity.

Ben&Jerry’s Homemade Holdings Inc., commonly known as Ben&Jerry’s, was created in 1978 by Ben Cohen and Jerry Greenfield in Vermont, US. It was then later sold to the British conglomerate Unilever in 2000. Before being part of Unilever, the company had already developed a social conscience over the years and started acting towards a more sustainable future. In fact, in 1992, they joined a co-operative campaign with the national non-profit Children’s Defense Fund to bring children’s basic needs to the top of the national agenda. In 1989, they opposed the use of rBGH (recombinant bovine growth hormone) in all their products and moved to using less chemically intensive ingredients for the safety of consumers and the environment. After the company was sold, they kept moving towards more sustainable policies and practices to the point of being certified as a B corporation in 2012.

As for their sustainability report, it really is detailed and lays out their sustainability goals for the future. From the 17 SDG’s posted by the UN, the company decided to concentrate on 9 of them and divided them into 5 categories : Equity, Sustainability, Dairy, Fair trade et Activism. In their 2019 SEAR (Social & Environmental Assessment Report), I found a detailed paper of how much they progressed on goals established in the last years. On their webpage dedicated to their yearly SEAR(from 2006 to 2019), I was able to track down the reports where the goals were first established. Their progresses are well documented and measurable. It’s really impressive to see how diligent they are and how much they actually progressed through the years.