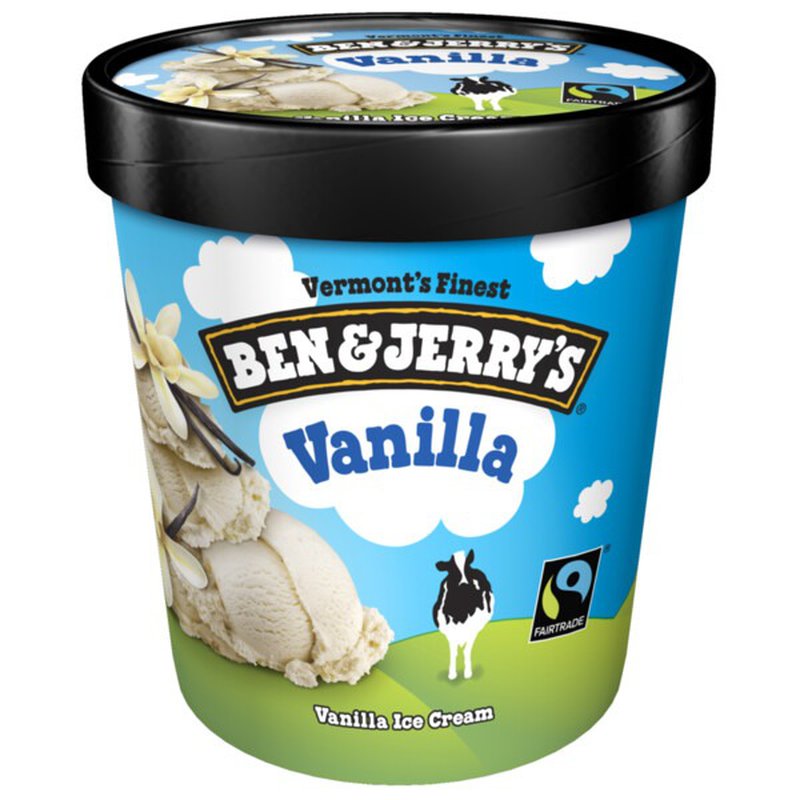 As a kid, one of my fondest memories has been the American Classic Ben and Jerry. These bright blue pints of ice cream were the centerpiece of my birthdays, school events, and sleepovers and continues to be a cult classic nationwide. Ben and Jerry are known to be a super ethical company when it comes to manufacturing its product, reducing its environmental impact, and giving back to the community.

Today, I’ll be reviewing Ben and Jerry’s delectable Vanilla Ice Cream flavor, one of my favorite recipes as a child and renowned for its rich, creamy texture.

From sourcing ingredients to packaging products, Ben & Jerry’s addresses the footprint its ice cream business leaves on the world. Some of these efforts include composting waste, reducing paper use, improving the energy efficiency of stores and production plants, and turning ice cream byproducts into chemical-free fertilizer. Ben & Jerry’s also works with dairy farmers and scientists to develop better ways to handle dairy farm manure — a major source of pollution.

The owners also use the power of their decisions “to help drive social change.” Ben & Jerry’s pays a premium price for its ingredients, such as cocoa, vanilla, and coffee, to suppliers in farmer-run cooperatives. This economic model ensures profits for those who produce the food.

Another core ingredient is its dairy milk and cream. Ben and Jerry have a program called Caring Dairy that helps farmers commit to more sustainable practices on their farms. It does this by being Fair Trade Certified by Fair Trade USA which means farmers are given fair, competitive prices for their products, are able to practice sustainable growing techniques, and are supported in learning new skills that will preserve their land for generations to come.

Ben & Jerry's partners with 250 farms globally to source everything from vanilla bean to milk. Most milk comes from the St. Albans Cooperative Creamery, just a mile and a half from the factory, making it easy to transport and having very few pollutants released into the atmosphere. St. Albans Cooperative Creamery is part of Ben & Jerry’s Caring Dairy program. Ben & Jerry’s created the sustainable agriculture program to provide farmers with a structure to evaluate, implement and continuously improve their practices. The program also addresses animal care and good labor practices for farmworkers. For me, this shows how Ben and Jerry is concerned with practicing what it preaches not only for itself but for all its stakeholders

With regards to waste, Ben and Jerry also have good news. The waste that is produced from their dairy farms is actually sent to the farms in the Caring Dairy program. Then, the waste is sent into a methane digester and generates biomass energy to power the farms. It’s great to see Ben & Jerry’s really think about their ice cream from all angles.

Despite all the good stuff about Ben and Jerry’s Ice Cream, there is some bad stuff. Ben and Jerry contain a lot of ingredients that are chemically modified. The label claims the ice cream is all-natural, but it contains cocoa processed with alkali, partially hydrogenated soybean oil, and corn syrup. Calling products with unnatural ingredients “natural” is a false and misleading use of the term, according to the Center for Science in the Public Interest. Other artificial ingredients in Ben & Jerry’s frozen desserts include dextrose and maltodextrin (both are chemically or enzymatically converted from cornstarch) and vanillin (a synthetic vanilla flavor). All of this contains saturated fat, a major contributor to heart disease.

The company mainly does its manufacturing operations in two 24/7 Vermont factories, operated by hundreds of flavor makers. To make the ice cream base, the milk heads to the blend tank. Cream, milk, and lots of sugar are churned together. The factory goes through 6,700 gallons of cream/milk every single day to make over 528,000 pints of ice cream.

Any dairy waste is collected and sent back to supplier dairy farms that have methane digester machines. The farmers then turn the waste into methane, which generates electricity to fuel their operations. To date, the machine, so-called the Chunkinator, has produced enough power to make over 16 million pints of Ben & Jerry’s ice cream. This is awesome and a prime example of the company’s mission statement of reducing waste and efficiency.

Next, the Mix Master will pour in eggs, stabilizers, and cocoa powder if it's a chocolate base. Then it's piped into the pasteurizer to kill harmful bacteria.

Finally, the mix is pumped through this giant freezing barrel, and when it gets to the front, it's finally ice cream. Then it goes into the first of two freezer visits. When it comes out, it's 22 degrees and somewhere between the consistency of a milkshake and soft serve. I wasn't able to find information for the exact emissions for each stage but normally each pint of ice cream we make produces roughly 3.3 lb. of greenhouse gases all along its manufacturing process.

In terms of packaging, their containers are certified by the Forest Stewardship Council, essentially meaning that the paperboard pints are made from responsibly sourced pulp that doesn't threaten local forests or biodiversity.

Plus another great example of Ben & Jerry’s innovation is that when it can’t find alternatives to harmful business practices, it just invents them. In 1998, the company became the first frozen food manufacturer to use unbleached paperboard containers, which it calls “Eco-Pints.”

For storage, Ben and Jerry only use hydrocarbon freezers, containing hydrocarbon, a refrigerant that produces fewer emissions than the freezer market standard hydrofluorocarbon. What’s amazing is that Ben & Jerry’s actually petitioned for the commercial use of HC in 2011 to the EPA and got it approved. Most freezers in Europe actually use HC instead of HFC.

The company was founded from a renovated gas station in Burlington, Vermont in 1978 with 2 guys and a legendary ice cream recipe. The pair is renowned for launching a brand based on sustainable ice cream making and advocating for causes they believed in, and it worked. Today, Ben & Jerry's is the best-selling single brand ice cream label in the US.

All of Ben & Jerry’s decisions are guided by its three-part mission statement: to make the best products, to be financially successful, and to stand up for social causes. From start to finish, Ben and Jerry were built on making society a better place and, unlike many other businesses, actively advocates for a variety of causes. Far from changing its LinkedIn profile or sending a Twitter update, Ben and Jerry have done things like joining the People’s client march and advocating for real and urgent action on climate change among global leaders.

One thing I loved about Ben and Jerry is the fact that they are passionate and transparent in their fight against climate exchange. I was honestly shocked to find a webpage solely dedicated to Climate Change. According to their website, the Life Cycle Analysis of a dairy pint was great. One pint of dairy ice cream is equal to 2 lbs of CO2 emissions. Compared to the 17.6 lbs of CO2 produced from a gallon of milk, this is a steal. Through a joint project with Green Dream Farm in Enosburg Falls, Vermont, and NativeEnergyOpens, Ben and Jerry have implemented a system that significantly reduces the amount of methane that enters the atmosphere.

This project, called the manure separator works by separating the liquids and solids in the cow manure so that the amount of methane created is dramatically reduced. This waste product originally came from making dairy and other raw materials for Ben and Jerry’s ice cream. Over ten years time, the project is estimated to keep enough methane gas out of the atmosphere to equal 10,000 tons of CO2. That’s

Another area of social issue Ben & Jerry is involving itself in is moving away from single-use plastic starting with announcing that it would no longer offer plastic utensils in its stores worldwide in 2019. Instead, the company is using wooden spoons and plans to find more alternatives to its plastic-lined cups and lids. While this may seem like a better alternative, it might not especially given its small scale compared to being a large company like Ben and Jerry that has the resources to do more.

"Single-use plastics are a pollution threat unlike anything we've seen before," says Paul Burns, the executive director of the Vermont Public Interest Research Group. "Across the globe, discarded plastics are choking our environment and threatening wildlife.. That's why Ben & Jerry's plan to move away from single-use plastics is exactly the kind of leadership we need. We urge other businesses to follow Ben & Jerry's example and kick the plastics habit."

The last great feature of their website is the fact that it’s also educational. As a Voiz Analyst, while I don’t mind reading through piles of scientific journals, I understand why so many people can get confused about the facts on climate change. Much of the literature out there on climate change is extremely dense and is tailored for people within that field, not the average person. More simplified and readable literature on climate change is needed for the majority of people who aren’t scientists. It’s an extremely complex topic and touches so many different fields, so seeing climate change spelled out so clearly was refreshing.

Through its “Environmental Timeline,” anyone can see that the company has progressed from building their first store out of reclaimed materials (1978) and promoting alternative energy with a solar-powered bus tour (1991), to agreeing to reduce greenhouse emissions by 10 percent (2002) and promoting preferable and painless alternatives to “paper-pile-proliferation” in its offices (2003).

Unlike most factories, what I like is that Ben and Jerry also hold food quality and worker safety at the top of their minds. In Ben and Jerry factories, employees pass a corkboard filled with pictures of their children before they enter the plant floor, providing motivation to work safely. To promote food safety, employees gear up with the proper hygienic clothing and footwear. Finally, due to extensive training, employees on the plant floor are empowered to make adjustments as they see fit. As a blue-collar job, it’s really rare and forward-looking to see such a bottom-up culture where operators are encouraged to give feedback and communicate problems readily to maintenance. As a result, the company has found that all floor workers are more proactive, resulting in a better manufacturing process. Despite all this, I wasn’t, unfortunately, able to find any certifications verifying this so this may not be true 100% of the time.

Ben and Jerry is also a part of the Fair Trade movement, a worldwide movement to ensure small farmers in developing nations can compete in an ultra-competitive global marketplace. Some examples of this are its Milk with Dignity program, an independent farmworker-led human rights standard for working conditions on dairy farms in the Northeast US. For farmers participation in the program, Ben and Jerry pay them additional money, so it’s a win-win for everyone, allowing them to stay competitive.

Despite all this good news, there are issues. In the past, the Organics Consumers Association filed a suit against Ben & Jerry and its corporate owner, Unilever, for failing to comply with its claim that its ingredients were sourced from farms that meet certain environmental and agricultural standards. The association argues in its suit that while Unilever markets Ben & Jerry’s products as containing milk from “happy cows” in “Caring Dairies,” the milk is actually from “regular factory-style, mass-production dairy operations.”

The suit also says that the company’s practices contradict its claims of environmental friendliness, citing as evidence the discovery of glyphosate in some ice cream flavors, a pesticide chemical. Nevertheless, following the suit, Ben & Jerry’s announced plans to phase out ingredients that are chemically dried using glyphosate and to roll out a new 100 percent organic line. For me, this means Ben and Jerry is open to criticism and change if it’s in line with their mission.