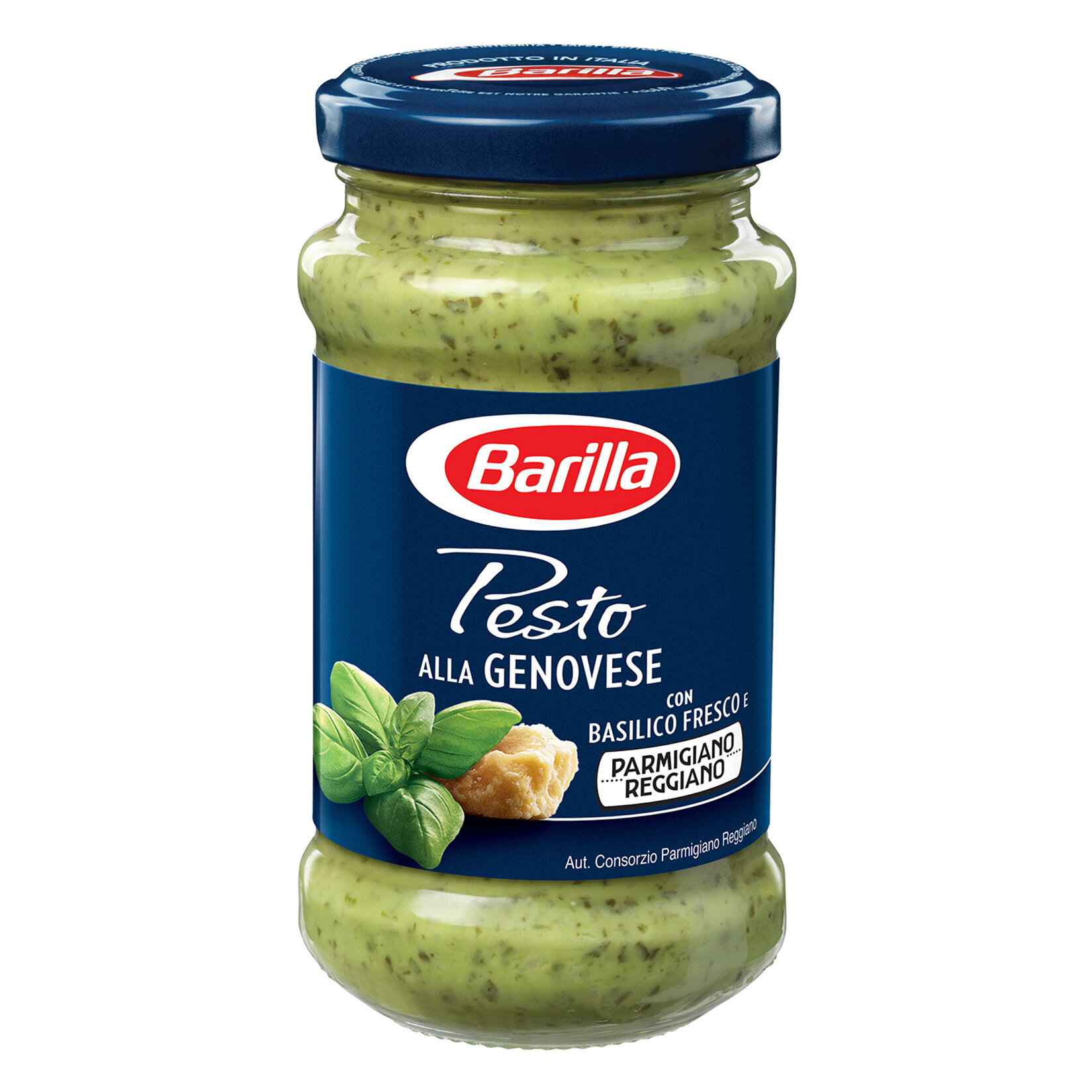 Sauce plays an important role in my pasta recipes, which I prefer as a saviour after a busy day since it is easy to prepare and has an impressive taste! Among the options with many alternatives such as Bolognese, Alfredo, and tomato I would love to eat pesto pasta. In this sense, Barilla pesto sauce, which has practical use, is recommended to be consumed within 5 days after opening it. I would like to guide both you and myself as a consumer by reviewing this product that I usually consume, which has such a short period of use with a price of between $5-8. If we look at the overall review of this product, I would like to point out that as a pesto sauce maker, you can easily prepare your more environmentally friendly pesto sauce at home!

When you look at pesto sauce basil leaves, Parmesan cheese, extra virgin olive oil, cashew, garlic and salt are the main components in general. In addition to these ingredients, there are components such as whey powder, sugar, milk protein, sunflower oil, acidity regulator and sweetener in this product. Barilla states that it may contain other tree nuts while saying there are no added artificial preservatives. At this point, the product ceases to be an environmentally friendly product that you can make at home with these extra ingredients. In addition to these, Barilla has decided to refrain from the use of genetically modified ingredients, guaranteeing not to use GMO ingredients for all its products which can be considered as an important regulation. Pesto Genovese is made with 100% Italian basils which are picked only in season and PDO Parmigiano Reggiana cheese that is produced with raw cow’s or sheep’s milk. Picking basils only in season is essential because that means the nutrient is not grown untimely with chemicals and other supplements. Organic production is the concern here but they do not emphasize that transparently. This should be explained very well. Basil is plant-based and vegan whereas PDO Parmigiano Reggina cheese is not. As long as pesticides are not used, basil cultivation is relatively sustainable. There is no known severe damage to air, water, land, soil, forests, and so on. However, cheese production can be considered unsustainable generally. Because it requires a lot of energy to raise cows, and you have to cultivate the feed, which requires a lot of pesticides and fertilizer. After the cows consume that feed, they emit methane through their intestinal systems, and their manure also emits a large number of greenhouse gases. Also, nitrous oxide, a climate-warming pollutant 298 times more powerful than carbon dioxide, is another particularly hazardous byproduct of cow manure.

Basils are mainly sourced by suppliers located nearby the Rubbiano (close to the Parma food district) plant to minimize the time between harvesting and processing. In this context, transportation emissions are also reduced. Although it is not mentioned in the sauce special, the international shipping line network is also open for development and the achievements made in this particular are given on the website with data. Since a glass bottling system is used in the product, it makes a good impression compared to plastic-like samples. Barilla chose to use 100% recyclable corrugated packaging to protect their pasta jar shipments with Amazon by following their company's ‘Good for You, Good for the Planet’ commitment for some time. However, Amazon is not a good example in terms of sustainability, and we are right not to be content with what they are doing. Then, the Barilla purchasing team identified molded fiber as a potential alternative for packaging, and it simplified the packing and replaced a substantial amount of corrugated material compared to corrugated packing.  This does not mean that Amazon is an environmentally friendly company, and it is considered that it has a long way to go, but it is acceptable for it to take part in such an initiative. According to the statement of Barilla’s project managers of the operation, they proceeded with a labour-friendly option and saw a rapid decrease in the cost of materials and labour savings which can be considered as an important movement in terms of sustainable e-commerce packaging model. That's why they're making progress on initiative plans.

They state that they collaborate with local farmers to improve the value chain in terms of quality, economic, environmental, and social sustainability. They apply the Barilla Sustainable Agriculture Code which has a wide range of obtaining safe and high-quality agricultural products, protecting and improving the environment and the social and economic conditions of farmers. They also consider the Barilla Guidelines on Animal Welfare that is drafted in collaboration with Compassion In World Farming (CIWF), an independent non-governmental organization, as a guideline. In 2020, Barilla became the only company in the world to receive Special Recognition from CIWF, and it seems like a remarkable criterion. They note that they consider the standards of the Guidelines on Animal Welfare to be an integral part of their contracts with suppliers of eggs, meat and fresh milk all over the world, periodically verifying their compliance with certain inspections. More transparency can be provided in this section. They should also present to the consumer what conditions they evaluate at what periods and how often. It's not enough to say that we are checking and taking care of it. In addition to these, according to Barilla, all employees involved in supply chains management, especially in the areas of global supplier quality management and purchasing unit, attended the Barilla/CIWF in-company training courses on animal welfare. Thanks to these, they declare on their sustainability reports that they have been the leading company in Italy in the field of BBFAW (Business Benchmark on Farm Animal Welfare), the global measure of farm animal welfare, for three consecutive years. They do not use animal testing to assess the safety or quality of their goods or raw materials in this sense. That's how they talk about themselves, but I can hear you saying how a company with such a wide supply network makes sure of its suppliers. In this regard, they are committed to ensuring that their suppliers use alternative methods that can meet legal requirements. I believe that the larger your supply network is, the more systematic and constructive you need to be in your applications. When we look at one of their studies it is provided that the Rubbiano sauce plant expansion completed in 2019 uses more than 400 gear motors and decentralized drives to minimize carbon footprint. Let's examine this information together, which does not make much sense when you hear it. The use of 400 high-efficiency decentralized gear motors and drives has enabled them to decrease not only energy consumption but also indirect costs, thanks to using less space for electrical panels and reduced maintenance. When we consider the shipping policy that they follow, they state that they have been encouraging transportation with a lower environmental impact. 70% of Barilla's products that is accounts for 100.000 tons of pasta and sauces for the German market are transported by 3 trains per week along the new railway service connecting the port of Parma with the port of Ulm in Baden-Württemberg in southern Germany.  The transition from road to rail is estimated to have removed 5.000 trucks from the road with a 70% reduction in harmful emissions. For me, seeing such concrete data increases the impact of the work done. Also, it is known that in 2017, they started using 83 hybrid technology vehicles. As a result of this decision, their carbon dioxide emissions decreased by 165 tons in a year. In addition, the largest electric charging station in Italy (31 charging points) has been installed in their centre. This is an initiative that should be taken as an example for many companies.

Barilla demonstrates that are committed to playing a role in reducing their impact on the planet. But how? They define their sustainable business strategy based on three ways: Good for You, Good for the Planet and Good for the Communities, and they have a website that is full of why they care about the environment. Barilla is a company that completely balances carbon dioxide equivalent emissions with the 4 brands included in its structure. You may wonder what is the point here. It means that they provide metric measures used to compare the emissions from various greenhouse gases based on their global-warming potential (GWP). From a socio-economic point of view, they have taken action to promote women in business in every aspect of company life to achieve gender equality, and women in leadership positions at their company globally increased from 33% to 37% within the 6 years. In addition to these, they founded a Global Diversity and Inclusion Board, comprised of a group of employees from around the world and external advisory members. The board includes an advisory board of independent external experts who provides vision, advice, outside perspective and guidance on equality and inclusion, and an operating committee, which consists of employees who make a recommendation on goals, initiatives and engagements to deepen equality and inclusion in the Barilla world. Also, Together with Urban Growers Collective (UGC), a non-profit organization, they work to overcome systemic racism in their food system in Chicago's South and West Side communities through some initiatives.