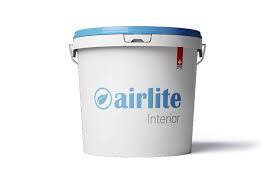 Mitigation and reduction seem to be the fundamentals of Airlite’s company strategy. Due to the use of a cold production solution and renewable energy, buying their product does not mean emitting extra Co2. At the same time, the product itself is mitigating the consequences of damage already made by humans, through purifying air. What’s important to highlight is that, when it comes to sustainability, Airlite is making sure to provide solutions for all aspects of it, not only environmental ones. The only thing that they could work on is their work ethics and social justice transparency. Not much information about it is provided for the consumer, which is an issue, especially in context of the nanoparticle technology being a big part of Airlite production considered controversial because of its negative impact on health.

Even though Airlite has many unusual properties for a wall paint, it does not have a very complicated ingredient list. The technology is based on titanium dioxide, a mineral substance which is generally used in the industry as a white pigment base. This substance is activated in contact with light, both natural and artificial, and transforms air pollutants such as nitrogen and sulphur oxides, benzene, formaldehyde and carbon monoxide into molecules of inert salt fixed to the wall. The manufacturer ensures that: “100 square meters ‘painted’ with Airlite reduces air pollution with the same eﬃcacia of a forest of the same size." It’s a really clever solution, especially because these salts are invisible, so they don’t create the effect of a dirty wall over time. Applied to motorway infrastructure, it repels dust and airborne dirt by attracting water molecules in the air to create an invisible, protective film that blocks dirt and dust from attaching. The question is, however, how long the wall can continuously purify the air, if the titanium dioxide gets used up in the reaction with pollutants? This information is not provided by the producer, which raises a concern.

When it comes to filler substances of the solution, Airlite is undoubtedly exceptional. It is sold in powder form, so it does not need any chemical thickeners, which are often harmful to health and produce the annoying smell of fresh paint (very harmful to the lungs). For this reason, and due to the absence of glues, solvents, and other chemical products, Airlite is completely odorless and does not require the need to ventilate the rooms during and after its application. What’s more, it is completely devoid of organic pollutant materials, such as formaldehyde, benzene and toluene, and heavy metals, which are cancerogenic substances generally present in traditional paints to prevent fungal and bacteria growth. Instead, the Airlite has natural alkaline properties that stops moulds from developing on walls and ceilings, creating a safer environment, especially for individuals with respiratory diseases. Apart from the health benefits, Airlite can also improve the buildings’ thermal performance. Thanks to the paint’s completely mineral composition free of petroleum products, it is anti-flammable and helps to reduce the heat absorption of the walls. Based on the independent case studies, covering the facade with Airlite can save up to 29% on the cost of air conditioning in hot months, which automatically means saving energy and emissions.

Airlite advertises their product to be “100% green, eco-sustainable and with a very low environmental impact.” Having analyzed the production process, it is clear that this is not just an empty marketing gimmick. Unlike energy-intensive thermal processes involved in the production of conventional paints, Airlite has a cold production process, powered entirely by renewable energy. Guessing by the product’s mineral composition, the powder is probably produced from Ilmenite or Anatase, which are examples of almost pure TiO2 in mineral form, naturally existing in nature. However, these are only guesses, as specifics aren’t given on the website. This should be directly explained for the consumer to make it more logical and fully reliable. As for other production processes which involve any type of energy use, Airlite ensures that all of it is produced from 100% renewable enrgy sources. This claim is supported by a Global Warming Index of only 0.115 Kg CO2-eq (EPD), which is very low in comparison to other synthetic paints. This way, the company showed a perfect balance between emphasizing their values and supporting their achievements through numbers. Apart from the carbon reduction, Airlite is said to be produced according to the circular economy principals, with 40% of the raw material being recycled in the production. But it is not further explained whether it relates to the packaging or the paint solution ingredients. Ready for trading, the paint is shipped in powder form, saving the energy needed to transport huge volumes of liquid and thus reducing the CO2 footprint. This is not the only advantage of the powder form, as it also enables the user to prepare only the amount that will be used for one time, whereas acrylic paints dry and thicken top quickly to store it for next time. However, there are some public concerns about this this technology. The nanoparticles in the powder turned out to diffuse very easily through tissues and to accumulate in organs, causing damage. The producers response to it is that these tiny molecules are embedded within the paint, so they stay harmless to health. This certainly needs further explanation, especially considering that the paint can be inhaled during the production and application.

It all started in 2007 when Italian researcher Massiomi Bernardoni created the first prototype of Airlite, which initiated the foundation of AM Technology with two following founders, Antonio Cianci and Arun Jayadev. The company specializes in chemical engineering, today holding a turnover of 3.5 million euros, but has comercialized only one product (Airlite paint) so far. From the very beginnings, Airlite was supported by European Union fund. Not only has it promoted the research and put the air purifying paint in many European countries, but it also enabled cooperation with many university laboratories, making Airlite seem like an invention based startup company rather than a profit based business. Right now, the product is available in UK, Spain and Italy, where it has gotten recognition through some mural art projects raising public awareness of environmental issues. The most famous one is called “Hunting Pollution” and is a huge mural of over one thousand square meters, made by the non-profit organization Yourban2030 in Via del Porto Fluviale in Rome. Such collaboration highlights the company’s values and shows that their sustainability is much more then just purifying polluted air.

To prove their liability, Airlite shows the Green Seal - US eco-label for products, which meet the most stringent assessment criteria for human health and reduced environmental impact. Further, they are Cradle to Cradle Certified™ at the gold level. Although mentioning sustainability certificates can often indicate greenwashing, in this case, both of these are independent, non-profit organizations with strict requirements in all categories of material health, material reutilization, renewable energy use and carbon management, water stewardship, and social fairness. This makes it seem that the company truly understands what ‘sustainability’ means, and how modern corporations should approach this topic.