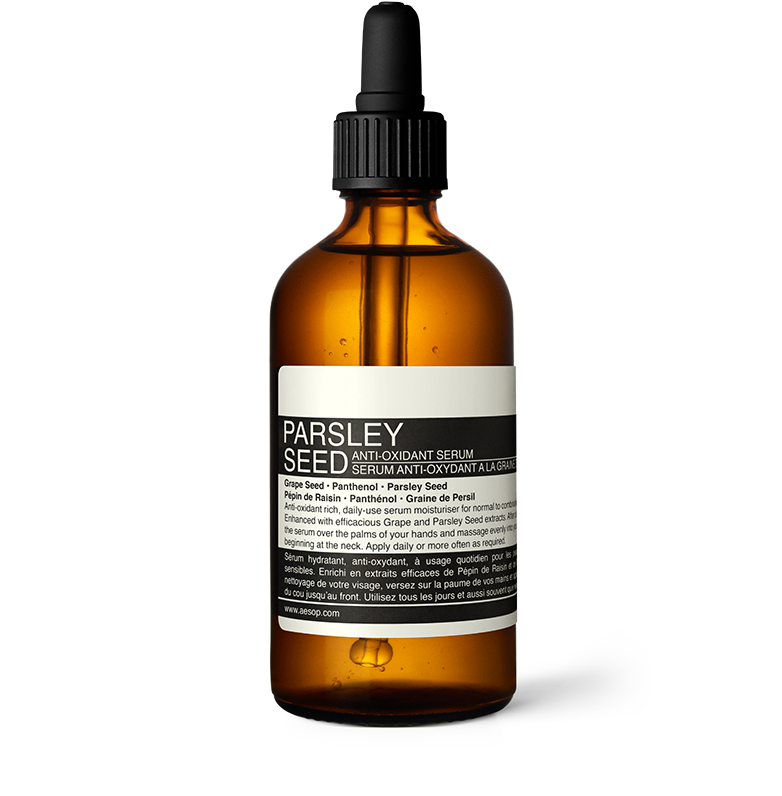 Aesop Parsley Seed Anti-Oxidant Serum is a top-selling product that aims to hydrate, soften, and fortify the skin. This serum retails at $75 for 100mL, making it a rather high-end skincare product. Being a vegan product, Aesop claimed to have used all safe and sustainable ingredients. Sadly, some of the ingredients like benzyl alcohol are not quite safe to use, as they have a higher risk of allergies and irritation. The packaging is quite good, though, as it is minimal and recyclable with no extra boxes used. With regards to their manufacturing, not many details regarding the supply chain are provided, lacking transparency. Yet, it seemed that they are doing quite well in ensuring their workers’ condition are good, and they are working towards a better product afterlife by expanding recycle and refilling programs. I hope this product will become refillable. It also seemed to me that Aesop itself did quite well in their environmental and social commitments, given that Aesop is a certified B Corp and the transparency seen from their clear goals and progress. Overall, although this product’s ingredients weren’t the best (so sensitive skin types should be more cautious), I believe Aesop has tried hard in making their business more sustainable by being more eco-friendly and socially ethical.

Ingredients
This product is vegan. I particularly love when they say they won’t use words like organic or natural, because although many plant-based products are used, some chemicals are still not natural. Instead, they state "high-quality, scientifically validated and skin-friendly ingredients." I love it because many brands use terms like ‘organic’ or ‘natural’ to try to greenwash their products when they are not entirely natural. According to the Environmental Working Group (EWG), a system that ranks the safety of chemicals used in different products on a scale of 1 to 10 (with 1 being the safest) and certifies products that are totally free of harmful chemicals, this product is rated 3 out of 10. This product has a higher risk of allergies and irritation. In particular, ingredients like benzyl alcohol and phenoxyethanol have marks of 5 and 4 respectively, indicating an even higher risk. The ingredients are sadly not as safe as we think they might be, which is pretty ironic when we look back at their "skin-friendly ingredients" claim. Regarding their sources of ingredients, although there is no other specification, they claim to have an ethical sourcing programme to ensure ingredients are safe, efficient, and sustainable. I do appreciate their work on making their products vegan and their sources sustainable. However, I believe they can better improve the ingredients used to make it safer.

Packaging
As for their packaging, Aesop has tried minimizing resource use by only using necessary parts that have low impact. They are transitioning over 80% of plastic bottles to a minimum of 97% post-consumer recycled polyethylene terephthalate (PET) content. I also appreciate them not using any paper boxes for packaging, but only the necessary parts like the bottles and pump.

Supply Chain and Labour
This product is manufactured in Australia but shipped to over 235 stores around the world. Global shipping definitely results in high carbon emissions. Also, there are no further details regarding their supply chain, which lacks transparency. For their labour conditions, they have an ethical sourcing programme to ensure suppliers use environmentally responsible processes, have safe working conditions, and treat workers with dignity. They assess suppliers using Supplier Ethical Data Exchange (SEDEX), a membership organisation that provides online platforms for companies to manage and improve working conditions in global supply chains. Having said that, they still did not provide any further details regarding which suppliers they used. It seemed to me that they were aware that workers’ conditions are important in their business, but the lack of transparency is disappointing.

Afterlife of Product
Regarding the afterlife of the product, there is a recycling program in some countries. Aesop aims to have their packages all recyclable, reusable, or compostable in the next 3-5 years. They are also trying out a refilling program on certain products in Australia and hoping to extend it to more products and locations. Note that this particular product is not refillable yet. I can see their effort in improving recycling projects and afterlife of their products, and hope that they can speed up in making these available for more products and branches. They are also cruelty-free, meaning that they will not conduct animal testing in all circumstances.

Aesop is an Australian skincare brand owned by Brazilian group Natura & Co, which also owns Body Shop and Avon. Aesop is a certified B Corp, meaning that they meet the highest verified standards of social and environmental performance, transparency and accountability. Being a B Corp generally means that they are willing to lower their negative impact in many fields, including the environment, workers, consumers, suppliers, and communities; they strive to achieve sustainability for both environmental and social aspects. However, many have criticized the B Corp certification as lacking transparency, and no specific assessment criteria and assessed data is provided. With B Corp certification becoming a more common occurrence, I guess being a B Corp isn't as significant as it once was.

Environmental Commitment
Aesop has a page dedicated to sustainability, which explains details regarding the ethical sourcing programme as well as certifications they attained. They also aim for net-zero greenhouse gas emissions by 2030. In their sustainability report 2019, they made some quite clear goals and progress in their environmental commitments. For example, 19% of energy used is from renewable sources, and their Australian and New Zealand operations (both offices and retail stores) are already carbon neutral. I found their plans and progress updates quite clear and authentic.

Social Commitment
The Aesop Foundation donates to chosen charities that focus on improving literacy. Charities can also apply to get donations from Aesop, which is more open and seems better than other brands that choose one or two partners on their own. Aesop holds different activities on improving the wellbeing of their employees. They launched a programme “Aesop Life” where topics like stretching and mental health were discussed previously, and access to mindfulness apps are provided for meditations. They also engage their employees in volunteering. I think Aesop has thought extensively in extending their social and environmental commitments; their clear goals and progress provides a lot of transparency on what they pledged to do and have done, which is quite positive.