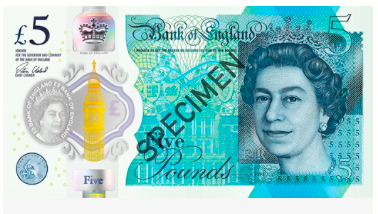 In the UK, we have had the five pound note since 1793 when it was introduced by the Bank of England as a result of a gold shortage following the Seven Years War. For its entire 223 year history up until 2016, this note was made out of some form of paper, but security reasons have led to the transition into polymer-based bank notes. Not only do the Bank of England claim these new notes are cheaper and more secure, but also claim that they are more environmentally friendly. It’s this claim that I want to address, especially seeing as there are 4.5 billion BoE banknotes in circulation, and even minor changes to the production process of the notes will have massive environmental repercussions. I also want to focus on this in light of potential greenwashing and lying by the BoE in respect to how the bank notes are produced, with vegan and environmental activists having challenged the BoE’s approach to using animal products and producing carbon emissions. However, with bank notes being a uniquely massive production line, and the BoE having far bigger things to worry about, we need to consider the legitimacy of these claims, and see if the BoE is really in a position where it can do better. This also needs to be considered in the context of the digital era, where cash is definitely no longer king, and alternative payment methods are paving the way for consumer transactions.

Overall, I think that the BoE can’t physically do more to better the sustainability of its bank notes at the moment, but it can definitely be more transparent, honest and critical of its product in order to take accountability of its ecological and social footprint. I say this because multiple independent studies have been undertaken to scrutinise the BoE’s data, with almost all of them finding that the results are measured in a way to minimise the perceived footprint of the new polymer notes. I’ll touch on these studies a lot in the coming sections. Despite the BoE employing a nuanced form of greenwashing in relation to its polymer notes, the alternatives available for the BoE at the moment are likely going to be worse for the environment, independent of the greenwashing. This is mainly in relation to alternatives made from palm oil derived chemicals, which are even less biodegradable than existing notes. Ultimately, the BoE has to pick its poison when it comes to its bank notes, and unless notes become obsolete altogether, the BoE will always be in hot water.

When considering what the English bank notes are made of, we need to not only consider the footprints of the initial ingredients in production, but also the complete lifecycle of the product, as this is an area of high controversy for the polymer notes.

Looking initially at the ingredients, the bank note is made out of a polymer plastic known as biaxially oriented polypropylene (BOPP). This plastic is non-fibrous and non-porous meaning that it’s extremely hard to tear and hence more durable. When it comes to actual production, BOPP isn’t made with palm oil or any ecologically damaging substances, meaning that in general, the polymer can be considered to be sustainable. The real issues concern the additives. Due to polymer itself having static properties, a lubricant is required to prevent notes sticking in ATM’s. However, the additive used to achieve this property is Tallow, a substance rendered from beef or mutton fat. Although only a minimal ingredient, with less than 0.05% of a note contains animal fat, it is still a major oversight which renders the notes non-vegan. Not only is this incredibly disappointing to everyone who wants to minimise the use of animal products, but it raises major ethical questions as banknotes have no tangible alternatives, leaving vegans in a moral dilemma. The severity of this issue has even been highlighted in the BoE’s own independent environmental consultations. Out of 3,554 respondents, 88% expressed an aversion to animal-derived additives compared to only 48% against palm-oil additives. Inherently, public opinion suggests that changing to the palm-oil polymer would be more desirable, but realistically it is a matter of preference, and neither is a great option. This lack of desirable option has led to the original polymer being kept for cost-cutting reasons, with a switch likely costing around £16.5 million.

Looking at the lifecycle of the polymer bank note, the BoE has aggressively marketed that the new, stronger bank notes will last at least 2.5x as long as the paper ones of years past. For the BoE, this means that far less notes need to be produced as the transaction lifecycle is far longer. This then minimises carbon footprint through lower waste and lower production. However, as studies by Evergreen Finance London suggest, the lifecycle of the polymer note will release 8.77kg of C02 which is 3x more than the paper notes. When accounting for the longer lifespan, this is an extra 2.76kg of C02. The reason for the results being so different to the BoE’s findings is because the BoE use functional units rather than the number actually used by an individual, which doesn’t account for the quantity of transactions. To me, this shows that the BoE needs to do more to calculate its carbon footprint, or at least acknowledge that the long lifespan of the polymer notes doesn’t actually lead to an environmental benefit. The only real end of life benefit concerns recycling, with BOPP being heralded as one of the most biodegradable polymers in the market.

All in all, it’s clear that bank notes of any kind have a sizeable carbon footprint, and that sustainability is a minimal concern for the BoE. This is especially notable when considering alternatives such as ApplePay and credit cards, which only produce around 20.8 grams of C02 over a three year life cycle. This makes me draw two conclusions. Firstly, I don’t think that consumers should be confident that banknotes can ever be a decently sustainable product. Secondly, I urge consumers to try and shift away from using bank notes if they care about their carbon footprint, especially when digital alternatives offer a far more practical and ethical option.

The polymer bank notes are made by Innovia Security in a £40 million facility in Wigton, England. The production process involves steps of opacifying, sheeting, printing and overcoating, with the actual polymer being blow moulded into a room-sized bubble. These processes require extremely large amounts of heat and electricity as expected, but Innovia Security has made efforts to optimise the process by ensuring there is zero waste to landfill and that a growing amount of their energy is generated renewably. In general, this is good stuff, but having looked through Innovia’s website it is difficult to find any data that quantifies their attempts at optimising their process. Because of this, I can’t reliably say that the process is being made as sustainable as possible. When considering the BoE’s role in this, it’s clear that their hands are pretty much tied. I say this because Innovia Security almost runs a monopoly on the polymer bank note market, as it produces almost all of the major European and commonwealth polymer notes. This equates to around 55 billion bank notes in total circulation right now. As a result, I don’t want to criticise the BoE for the sustainability of the production process, principally because they don’t have any other options available to them, and they don’t have a large enough stakeholder presence to pressure Innovia into change.

With the Bank of England being the central bank for England, it’s placed into a unique position for reviewing, as it doesn’t have the same priorities and duties as private sector firms that create typical products that we review.

Looking first at their supply chain, Innovia Security has highlighted which of the Sustainable Development Goals they wish to work on in their sustainability plan. This is a very heads up approach which I appreciate, but in the same vein as their other sustainability goals, there is a lack of data, which makes me question the actual progress they’re making.

When looking at the Bank of England itself, there is a plethora of data, analysis and evaluation of its role in ensuring national sustainability improvements. Obviously, due to being a public body, the BoE doesn’t qualify for many of the certifications which I’d usually look for when reviewing products. However, there are plenty of firsts for the BoE, which emphasise how they have a leading role in the global banking picture. For instance, the BoE is the first central bank to publish climate disclosure reports that cover financial assets held for monetary policy purposes. For this step, these reports have been awarded the Green Initiative Award in the Central Banking Awards. Although this award is merely an acknowledgment of the BoE’s attempts, it still showcases a degree of international leadership and innovation in public sector sustainability.

When it comes to social sustainability, the innovation and leadership is no where to be seen. In 2018, the BoE issued a report showing that female staff earned around 25-30% less than comparable male staff members. Although this is on par with the financial industry as a whole, this is absolutely no consolation, and is extremely poor for a public body the size of the BoE. This data also fits into the lack of diversity within the BoE, with the majority of senior roles being handed to men, as well as internal reports of micro aggressions against ethnic minorities being rife. All in all, the BoE can report and discuss all it likes, but there is a real issue of social sustainability in its offices and work places.